There are two horizontal navigation PIDs connected to each other. One controls AQ’s horizontal speed (navigation speed rate) and the other controls its distance to target (navigation distance rate). You won’t find any D terms here because we deal with relatively slow changing signals, thus these are actually PI controllers.

WARNING! There have been reports of certain PID values over saturating the motor outputs possibly causing a crash if not adjusted properly. Read our forum thread here.

The navigation distance rate accepts distance commands (in meters) and calculates the error depending on current position. This PI outputs a horizontal speed command (m/s), which enters the navigation speed rate PI. Here the speed is compared with current speed from sensors and the error is regulated and outputted as a tilt angle (in degrees).

In this example (actually the defaults), every one meter error in distance will result in a 0.5 m/s velocity. This velocity is entered into the speed PI, which gives 6 degs of tilt for each m/s input. Another 0.005 degs is added to the output every 1/200′s of a second it takes to reach the target, i.e., each one second away from the target will add 1 degree to the output. The maximum allowed tilt change, is 20 degs for P term and 20 degs for I term. However, the maximum allowed tilt change from the whole PI is only 30 degs. 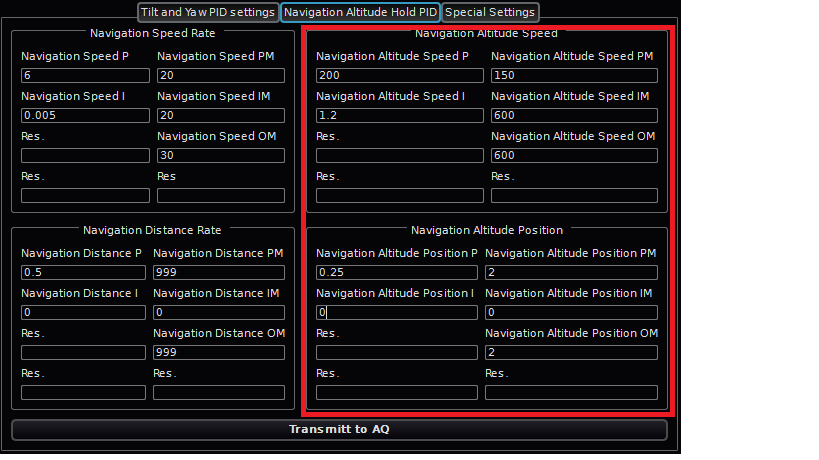